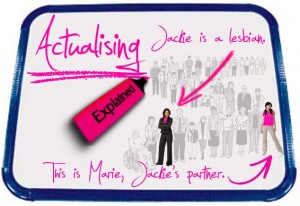 Previously we learned about usualising and how it acclimatises children to the existence of something (e.g. LGBT people). This prepares children to be taught in more detail about those lives later on. This more in-depth teaching is the second teaching method we employ. It is called ‘actualising’ and involves lessons with specific objectives that include a greater understanding of LGBT identities, and their impact on people and culture.

Don’t you mean ‘actuating’ or ‘actuate’? These words are similar in meaning but actuating describes putting something in motion and connotes real movement. This could be true if you likened it to putting thoughts in motion, but ‘actualising’ also involves a language of description and analysis that doesn’t necessarily require the learner to have to engage i.e. they can still be passive learners. Actualise merely describes the fact that they are aware that they are learning about LGBT lives. In ‘usualising’ this is not always the case.

Okay, so what does it mean? To make real in the minds of a learner. To explain; to examine and make concrete a subject so that the learner can put it in a real life context. It is the natural successor to  usualising. Once pupils are habituated to something (LGBT life) they can then study it without distraction. Actualising describes and disseminates subjects that usualising has made an acceptable part of reality.

Example 1: A KS2 PSHE lesson covering different types of relationships, including those within families and between older and young people, boys and girls, and people of the same sex, including civil partnerships. The inclusion of LGBT people is not simply referential because the teacher wants the class to consider the validity of civil partnerships in comparison to marriage. The objective (for pupils to explain why it is sometimes harder for LGBT people to be open about their relationship) requires discussion and examination of LGBT relationships. In doing so, LGBT lives are made concrete.

Actualising means presenting the subject in some fuller aspect. It should include the positives and negatives as well. We are not making value judgements, nor are we encouraging bias in favour of LGBT life by ONLY representing positive images of LGBT people.

LGB Rights’ asks learners to discuss a range of opinions in relation to homosexuality and the rights of Lesbian, Gay and Bisexual (LGB) people; in particular they are asked to think about homophobic bullying in schools and about ongoing debates concerning same-sex parenting and adoption. Here we go into some detail with learners about LGB life and learners are exposed to current controversial debates. In doing so, the teacher is not asking the children to make value judgements over LGB people’s suitability as parents (that is not up for debate) but in highlighting the controversy learners begin to understand how prejudice and discrimination can impact upon a particular group.

Your Questions on Actualising