You talk about ‘preparing’ children. Is being gay really that shocking?

The idea that some men are attracted to other men is certainly not new to our times, but some children grow up in houses, and attend schools where they do not see, hear or learn about people who are gay. A child will only believe that seeing two men holding hands is wrong, until s/he is told that it is. Pupils might find it ‘shocking’ if they have never seen it before. In schools where image of gay men are rare, learners may be suddenly presented with the image in a PSHE and immediately expected to accept and understand it. The same is true for never before seen images of lesbians couples and trans people.

To explain: Imagine some people can fly. You have heard about these people  but never seen them.

if you had been shielded (intentionally or not) from flying people all your life. You barely knew anything about them, and had even heard some negative assumptions, which in the absence of facts was all you could rely on. Imagine then, your shock when in a Science lesson in Year 8, the teacher starts talking about flying people as if they were everyone. Also, when you start to giggle/laugh nervously/act shocked etc. you are told off, and asked to stay behind because of your ‘mean, flyphobic attitude’. You are suddenly embarrassed in front of class, and grounded by your parents: and in your mind its all because you of those damn flying people. Counter productive teaching there we think.

Also, when you’re not acclimatised to something you are distracted by it. Students  not acclimatised to LGBT people are less available for learning about them. If you’ve ever been caught off guard by a shock encounter with someone you didn’t want or didn’t expect to see, you’ll understand see how difficult it is to recall what was said during the exchange.  You were distracted, too busy processing that the person was really standing there, (existing) to take in what they said.

So in ‘usualising’ we’re also ‘acclimatising’. ‘Usualising’ gives the unspoken nod of approval to the existence of LGBT lives. If this happens at a younger age, children can made more available for learning about LGBT lives in secondary. 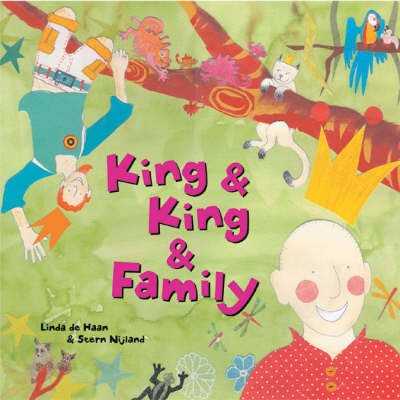 Example 3: Ks1: English – ‘King & King & Family’ The lesson follows the story of the book in the title and 2 male characters who are in love. The two explore a jungle, finding various animals that all have children; King Bertie expresses the wish that he and King Lee have a child of their own. When they return home, they find that a lonely orphan girl has stowed away in their suitcase. They adopt Daisy and raise her as a princess’.

a) the fact that some children find themselves without biological parents,
b) issues of abadndonment,
c) the dominance of nurture over nature and
d) that there are some men who love other men instead of women,  but also
e) that although these men cannot biologically/naturally make a baby
f) it still is a natural desire,
g) that they would want to, are capable of and are allowed to raise other children and
h) that they can legally claim those children as theirs. Phew!

Quite a lot for a 14 year old in Year 8, especially since some of them can’t operate a washing machine.