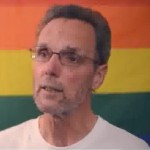 This lesson is mostly based on interviews with Geoff Hardy and Tim Lucas, former members of The Gay Teachers Group (forerunner to Schools OUT UK) who describe the momentous events of the 1983 NUT Conference, which was held on Jersey. In the second part of the lesson, Myrtle Finley from the Proud Trust (then LGBT Youth North West) describes how the group organised and campaigned successfully to defeat local plans to close their premises.

The background is that male homosexuality had been partially criminalised in England and Wales in 1967 but it remained illegal in some other parts of the UK, including Jersey. So when the National Union of Teachers held its Annual Conference in Jersey in 1983, gay and bisexual male teachers were faced with a dilemma. This lesson looks at their protest and how the Union reacted at executive and grass roots levels.

For the record, Lesbians and Gays Support the Miners was founded in 1984 and the National Union of Mineworkers reciprocated by taking a pro-LGB motion to the Labour Party Conference, which was passed overwhelmingly. This was the turning point for the Labour and Union movements regarding lesbian and gay rights.

This lesson usualises gay and bisexual men in the first half and the LGBT community in the second half.