Goodbye to the ‘Gay Lesson’

The infamous ‘gay lesson’, often left to PSHE teachers or outside professionals every academic year, became synonymous with the view that knowledge of LGBT lives and culture were pretty much irrelevant to childrens’ lives. That helped shape a school culture where being ‘gay’ was simply an embarrassing affectation, that would be dealt with during adulthood, and alone.  For some teachers who lacked the training, resources or senior leadership support, homosexuality was the topic that ‘dare not end in Q & 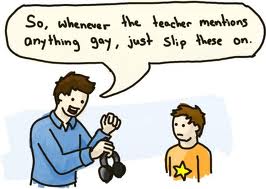 Trans issues were rarely covered, if at all. There was no celebration of LGBT culture, no awareness of LGBT history and no concept of how lesbians and gays could be anything but the ‘other’ in life.  In order for LGBT experience to be represented, the idea of the annual ‘gay lesson’ had to go.

As more evidence came to light on the prevalence and harm of homophobic bullying, educators realised that a new approach was needed. To combat the prejudice, schools needed higher quality and more consistent methods of tackling the subject.  In 2003, two changes to the law caused substantial shifts in how schools achieved this. The repeal of Section 28 gave teachers the room to explore the issues (though many good teachers had been for years) and the introduction of the Sexual Orientations Regulations in 2003 reinforced to public bodies, such as schools, that homophobia was the same as racism, sexism or any other form of discrimination in the workplace. Many proactive headteachers acted on new official government guidance on the subject, and teachers wishing to do the work could discuss it with more authority. However, much of the work was in PSHE and Citizenship lessons only and presented LGBT materials which concentrated on prejudice and discrimination.

The arrival of Schools OUT’s seminal project, LGBT History Month in 2004, with its focus on celebration and recognition of LGBT culture; past and present, gave educators greater scope to talk about the bigger picture of LGBT experience, in which LGBT people were the agents of change rather than just victims of prejudice.   Most importantly for schools, LGBT History Month created and inspired several teaching packs and toolkits that covered lessons on sexual orientation and gender identity across the curriculum. This afforded access to and relevance in a wider variety of subjects. Every subject and every teacher now mattered. Homophobic/transphobic language and bullying, after all, could occur across the school, in any lesson.  The phrase ‘whole school approach’ became crucial in school policies that now specifically mentioned sexual orientation.

Now that there was evidence of need and scope to deliver school-wide, LGBT subjects still retained the sense of ‘other’. It seemed interesting that though LGBT lives seemed so ‘alternative’ to students, homophobia/transphobia was still so mainstream to them.

Schools OUT had always asked the question: How could teachers instil in their pupils an acceptance of LGBT experience as everyday? We knew that it was this sense of acceptance; of ‘that’s how it is’ that – ironically – had caused homophobia to become almost an expected part of the school experience. Whilst LGBT History Month allowed teachers to celebrate LGBT culture, we needed a project in schools that enabled schools to usualise it as well. It was time to fine tune the learning for pupils. We had to go back to the curriculum and it had to start early.