For a quick overview read this page.

Is that a word? 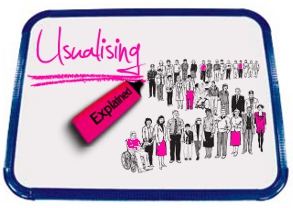 You won’t find this verb in the dictionary. It means to make usual/everyday/ubiquitous. ‘Normalise’ is its closest synonym.

Why not say ‘normalise’ then?‘

Normalise is problematic when describing humans as it assumes there is a ‘right’ way of being and is therefore a pejorative term to many who consider themselves outside the majority. It also has connotations of ‘trying to fit in’ rather than embracing diversity.

In what context is ‘usualise’ used?

When we usualise something, we acclimatise people to its presence, and take away the threat of difference which creates fear and discrimination. Usualising in schools has more to do with familiarizing learners with a subject’s everyday occurrence or existence rather than an in-depth understanding of the subject.

What does that look like when educating about LGBT?

Learners should consistently be made aware of the presence of LGBT people. LGBT people are integral to our learner’s lives. They exist in all times and all places. They exist in the here and now; essential to the UK society and culture. Schools rightly do not only use white, Christian references in their curriculum, but a range of resources/artefacts/case studies of people across race and religion. Teachers should try to use materials that span a diversity of sexual orientation.  In the context of the Classroom ‘usualising’ occurs when a teacher references Lesbian, Gay or Bisexual sexual orientation without inviting further comment.

A KS4 Geography lesson, looking at interesting facts of major world cities, cites San Francisco as having the largest percentage of same-sex households of any American city. The teacher does not invite  discussion of LGB lives because of this fact. It is simply 1 fact out of 20 facts that are given to describe San Francisco.

Usualising is done indirectly. Usualising is not an instructional method, rather it is referential. It is best used in subjects with programmes of study that do not relate to knowledge of identity, or discrimination e.g. Maths, D&T, PE, ICT, MFL etc. and where the objective is to learn subject specific key skills. To the teacher who commits to the process, it is a method of teaching that does not require in-depth knowledge of the subject. Diverse sexual orientations are not open for analysis; the teacher simply has to refer to their existence.

So how does that help challenge homophobia/transphobia?
Consider: When an infant sees a spider for the first time, is it afraid? When the infant sees the parent scream and shout every time a spider appears, does not the infant then learn it should be afraid?

Usualising LGBT lives means that learners are made aware of the diversity of LGBT people, that they are found in every culture, near and far, and that they share many characteristics with people who are heterosexual. It is also about acknowledging the differences between LGBT individuals themselves, that they do not all conform to the same behaviours/appearance.

In this way usualising tackles prejudice. Usualising can be used to make visible any minority group.

You will see this icon on lesson pages / posts which feature usualising.
You can also search for ‘Usualising Lessons’ on the search bar, or use the tag cloud on the side bar.