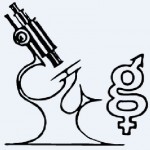 This lesson gives background information about trans and non-binary issues and some explicit information about sex differentiation. It explains in broad terms, the role of the brain, and how this is not always congruent with the sex appearance.

Most schools are subject to the Public Sector Equality Duty, and all are required to abide by the Equality Act 2010. Understanding gender diversity starts in school. In law, gender diversity is as important as race and ethnicity diversity. Religion, belief, or cultural norms may not be used to discriminate against those who are gender non-conforming. As children reach puberty, more of those who experience gender incongruence will be seeking physiological intervention, although this is not necessary for all trans and non-binary young people. Roughly 1% of the population is gender variant to some degree, so schools must be prepared to support these young people if they choose to transition.

Moreover, since 2010 there has been a significant increase in young people defining as transgender or non-binary at school and this has forced many schools to confront gender non-conformity whether they might have wished to do so or not. Fortunately there is a lot more good advice and counselling available, from organisations such as Gendered Intelligence to individuals such as Juno Roche.

This lesson usualises and actualises people on the trans spectrum.

← SRE: What can SRE do for us?
The Proud Trust’s Resource Pack on Religion, Belief and Philosophy →