What the Rainbow Represents

How does educating about LGBT experience help an understanding of diversity as a whole? 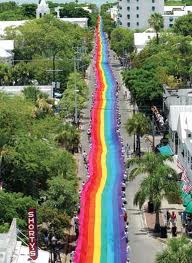 “Rainbow flags tend to be used as a sign of a new era, of hope, or of social change. Rainbow flags have been used in many places over the centuries: in the German Peasants’ War in the 16th century, as a symbol of the Cooperative movement; as a symbol of peace, especially in Italy; to represent the Tawantin Suyu, or Inca territory, mainly in Peru and Bolivia;by some Druze communities in the Middle east; by the Jewish Autonomous Oblast; to represent the International Order of Rainbow for Girls since the early 1920s; and as a symbol of gay pride and LGBT social movements since the 1970s.” Wikipedia

Today, the flag is flown as a sign of inclusion and welcome. When flown outside businesses, or placed in shop windows, it tells LGBT people they can relax, and feel safe to do what others’ take for granted: to hold hands or kiss their partners, to rent a hotel room together, to book a table for valentines day, to demonstrate their love without hate. As an image, it reminds us of not only the diversity of sexual orientation but also of the diversity of human characteristics as a whole.

The Colour of Characteristics 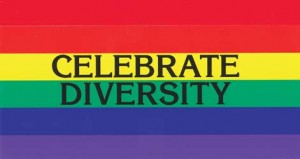 Characteristics help shape identity. The flag’s 6 colours represent different aspects of LGBT communities, but the rainbow is also a symbolic representation of the variety of human expression, in all its hues and shades. Characteristics might be thought of as primary colours of our psyche which when mixed together form the different shades of our identities. Our experiences throughout life, especially during childhood, affect the saturation and brightness of those identities. 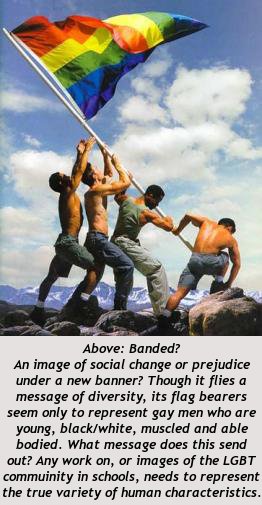 It is interesting to note here that the banded colours of a rainbow in nature, are an artifact of human colour vision. In black and white photos the rainbow is seen only as a smooth gradation of shades. Identities in reality are not fixed bands of colour but merge and shift with one other. It is the labels of language that create banding and conflict between groups. Even within some LGBT communities, this ‘banding’ of identities can occur, where sub groups form and do not mix with the whole.

The rainbow flag in its most ideal form imagines a world where difference creates peace.  LGBT communities can be living examples of how pluralism is as important to understanding community cohesion, as light is in illuminating a rainbow’s colour. 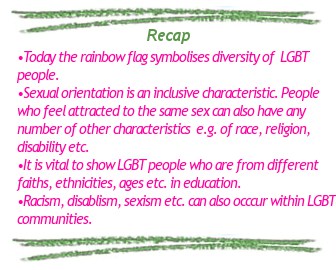