By Beajas on July 25, 2013 in KS5 Schools OUT Lessons, Resources, Schools OUT Music Lessons 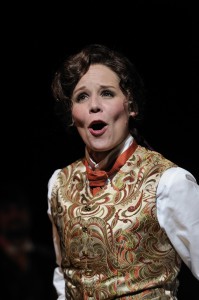 ‘The trouser role’ or ‘Breeches role’ is a role in which an actress appears in male clothing (breeches being tight-fitting knee-length pants, the standard male garment in the classical era when breeches roles were introduced). In opera it can also refer to any male character that is sung and acted by a female singer. Most often the character is an adolescent or a very young man, sung by a mezzo soprano or contralto, or, occasionally, a male countertenor. This lesson enables learners to have a knowledge of LGBT musicians in history, a working knowledge of the ‘trouser role’ and identify classical harmonic structures in the aria ‘Voi che sapete’.